In 2020, amidst the pandemic and the conflagrations (both physical and ideological) that have arisen in its wake, I think it’s appropriate to turn our minds to a different kind of blaze, the one desired by the Son of God:

Jesus said to his disciples: “I have come to set the earth on fire, and how I wish it were already blazing! There is a baptism with which I must be baptized, and how great is my anguish until it is accomplished!”  (Luke 12:49-50)

Renewal of the world begins with interior transformation. No elected official, political party, or legislation — past, present, or future — has the power to save us. Only Jesus Christ has the power to save; He becomes present to us and renews us in the power of the Holy Spirit. In Him, we become instruments of renewal in the world.

If I could recommend only one book about renewal of life and the renewal of the Church through interior transformation, it would be Fire Within by the late Fr. Thomas Dubay, SM. The book changed my prayer life, and continues to do so. It’s a great summary of the teaching of Saint John of the Cross, Saint Teresa of Avila, and the Gospel on prayer.

I’m posting the first three paragraphs here, in the hope that it will be enough to coax at least a few of you to pick up a copy and read it:

The Son, radiant Image of the Father’s glory, proclaimed that He had come to cast a fire upon the earth and that He longed for it to burst into blaze. It was in the form of fiery tongues that the Holy Spirit of Pentecost descended upon a timorous group of men and women. Their minds and hearts having been enkindled with a burning love and ardent zeal, those who received the Spirit sparked the astonishing transformation of an unbelieving and corrupt civilization into a community of faith and love.

In our day the divine fire has not been extinguished. The consuming conflagration has not been contained. The proven incapacity of committees and clubs, speeches and surveys, electronics and entertainment profoundly and permanently to change vast numbers of people for the better has to be conceded. As the experience of the centuries attests, true transformations in the world and in the Church continue to come about only through the interventions of men and women on fire — that is, through saints. The evidence is overwhelming. It is also widely ignored, for it contains an otherworldly wisdom that this world does not welcome. For some, taking the evidence seriously presents a snag, since it implies striving for this same kind of transformation within oneself as a starting point for improving the world. Indeed, at this very moment, deep and lasting changes in the Church are being brought about by a faithful few who are burning interiorly as a consequence of the deep prayer given by the Holy Spirit, who renews the face of the earth in ways other than our own. These quiet, humble, unassuming individuals seldom write position papers, and they are not likely to appear on controversial television talk shows or to attract front-page headlines. They are not identified with any “ism,” and they care nothing for a life of luxury or notoriety. They do not achieve popular acclaim by opposing ecclesial leadership and rejecting received doctrine. Rather, they are like the saints have always been. The burning ones are the unflickering light of the world, the savory salt of the earth, the lively leaven in the mass.

Thus, contemplative husbands and wives are examples of holiness to their children not unlike a Hedwig or a Thomas More. Prayerful clergy serve to inspire parishioners through soul-stirring homilies, sound guidance in the confessional and comforting concern in times of need. Teachers who are aflame ignite their students by their contagious enthusiasm as well as by the attractiveness of the truth they proclaim. Nurses close to God have a healing influence on both soul and body. In the home, in the marketplace, in the cloister, the love steadily radiating from these simple ones permeates and invigorates the world around us. It is unmistakable evidence of God living in and among us, a clear manifestation to our world that the Incarnation has taken place. Common folk instinctively grasp this, while it easily escapes the more sophisticated, who often fail to comprehend what transcends the tangible order of meetings and strategies and publicity campaigns.

In the words of the Saint Pope John Paul II, our responsibility is simply to “become saints, and do so quickly.”

For Lent, I have posted various resources, including:

Have a blessed Lent!

In the fall of 2014, Open Window Theatre in Minneapolis performed The Jeweler’s Shop, one of my favorite plays. It was written by Karol Wojtyla (who later became Pope St. John Paul II).

On Wednesday, October 22, 2014, immediately following a performance of the play, I joined three others in a panel discussion of the text. I don’t know nearly as much about John Paul II, the theater, or the play as the others on the panel, but on the basis of my sheer enthusiasm for the play, I was invited to participate.

Here’s a short description of the play, from the official English translation:

Love is “one of the greatest dramas of human existence,” writes Pope John Paul II. In this illuminating three-act play — here in the only English translation authorized by the Vatican — he explores relationships between men and women, the joys — and the pain — of love and marriage. The action unfolds in two settings at once: a street in a small town, outside the local jeweler’s shop (people go to buy their wedding rings there), and the mysterious inner landscape of personal hopes and fears, loves and longings. Each act focuses on a different couple: the first happily planning their wedding, the second long-married and unhappy, the third about to marry but full of doubts. Writing with power and understanding about a love that survives the grave, a love that has withered and died, a love budding out of complexes and insecurities, the Pope addresses such fundamental human concerns as: What does it mean to fall in love? When do we know that a love is real — and can it last? If it dies, how do we go on living — and loving — again? There are no easy answers, and there is no happy ending — such is the nature of men and women, and such is the nature of love — but there is hope, if we only acknowledge our need and accept the risks of a deep and lasting commitment. This is a play full of wisdom on a subject of great relevance to all, and it provides a special insight into the thoughts of the man who, like no other, has captured the imagination of people of all faiths throughout the world…. Karol Wojtyla — Pope John Paul II — has long been involved with the theater. As a student of literature, then priest, bishop and archbishop, he acted, directed, wrote dramatic criticism, made a Polish translation of Sophocles’ Oedipus Rex, and has authored six plays. (source)

The panel discussion lasted about an hour. Here it is in audio format:

I remember seeing Mel Gibson’s film The Passion of the Christ for the first time at the Arclight Hollywood on Ash Wednesday of 2004. Father Willy Raymond, CSC, had offered to take the staff of Family Theater Productions after the celebration of Mass. So we all processed into the theater with ashes on our foreheads, to the bewildered stares of some. (You could see them working it out in their minds: oh, those must be the Passion groupies. People dress up like Frodo Baggins before a Lord of the Rings premiere, so this must be what the Christians do before seeing their movie…)

At any rate, the film made such an impression on me that I decided to use it as my Lenten meditation: I went and saw the film every Friday of Lent that year, just as I would ordinarily pray the stations of the cross.

I had already planned to host a stations of the cross hike for young adults in the Verdugo Mountains on Palm Sunday. The day before the hike, I realized that I had no text to share with others as we prayed along the way. However, the images from Gibson’s film were etched clearly in my mind and suggested many points of meditation, so I decided to compose my own via crucis based upon the film.

I’ve made the resulting text available on my website in multiple formats:

PS – Another multimedia stations of the cross — much more brief (around 4 minutes long, in Flash format) — is still available on my site here. I used some music from Schindler’s List for this one, which somehow seemed appropriate. I am reminded of a quote from Hildegard Brem which the Pope includes in his book, Jesus of Nazareth, Part II: “The Jews themselves are a living homily to which the Church must draw attention, since they call to mind the Lord’s suffering.” 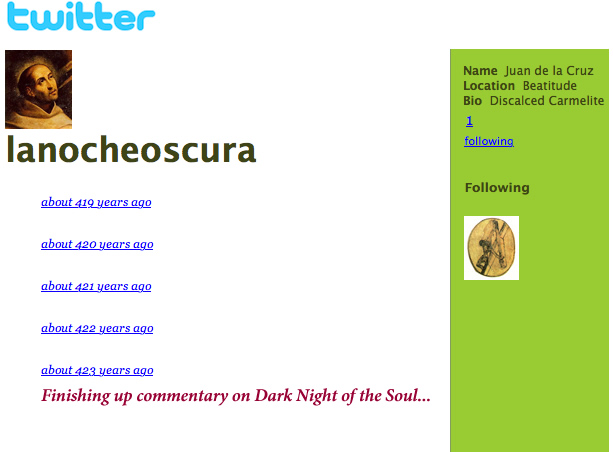